The Music Studio is committed to the safety of is community. We have developed a robust Safety Plan to help prevent the spread of COVID-19, and are asking every enrolled family to sign a Safety Pledge.

Every year The Music Studio Kids perform at “The Magic of Christmas,” the holiday spectacular hosted by the Albany Symphony Orchestra at the Palace Theatre. This performing troupe of about 40 private piano students from The Music Studio is featured throughout the show, singing, dancing, and playing Orff instruments such as xylophones, metallophones, and glockenspiels. Although Orff instruments are used often in classroom settings, it’s unusual to hear them in a concert setting. In the capable hands of The Music Studio Kids, under the direction of Noel Liberty, they truly shine.

“Each year I expect them to be able to do more than the year before,” said Mr. Gerike.  “This year I found that I kept giving them the lead in many of the carols. . .  And not only do they frequently have the melody, but they have intricate bits of harmony and counter-melody, too.” When he brings in the orchestra, Mr. Gerike strives to make sure they have something fun to play, but that the Orff parts are still clearly heard. “It’s a delicate balancing act.”

Mr. Gerike will arrive in town to hear the piece come together in rehearsal just a few days before its world premiere at The Palace Theatre on Sunday, December 3. “The Music Studio Kids are so excited that the actual composer will be hearing them perform ‘Christmas Joy.’ They are working hard to make sure his beautiful work comes off perfectly!” Mr. Gerike is pictured below in 2011 with The Music Studio Kids, choreographer Abby Todd, and director Noel Liberty. 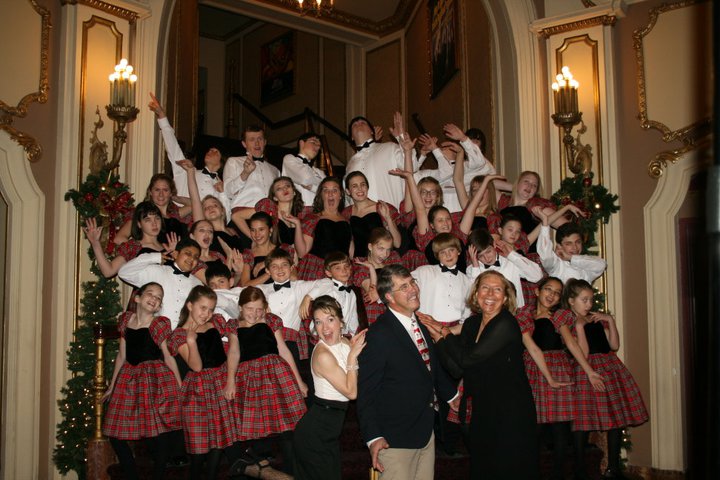