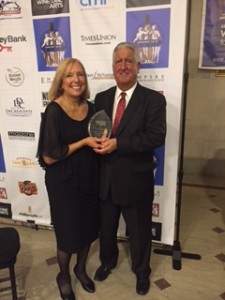 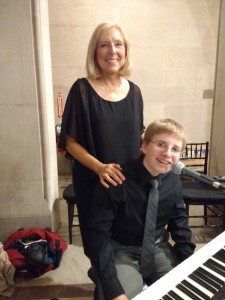 On Thursday, January 12, at the Mayor’s Opening celebration, the board of the 8th Annual Albany Chefs’ Food and Wine Festival honored Noel Liberty, founder and director of The Music Studio. Mrs. Liberty received the festival’s 2017 Honorable Gerald D. Jennings Backstage Award for her decades of work in support of the arts community of the Capital Region. Wine and Dine for the Arts (as it is commonly known) is a three-day fundraising extravaganza by the local food and hospitality industry for arts organizations like Capital Repertory Theatre, Park Playhouse, Albany Center Gallery, the Albany Symphony Orchestra, and many more. Over its first seven years, the festival has donated more than $675,000 to the arts. (You can find out more information on the festival website.) Mrs. Liberty was deeply honored to receive the award, and especially pleased that the other honoree this year was none other than singer, songwriter, and educator Ruth Pelham, of Music Mobile. Music Studio student Jesse Cohen-Greenberg was also on hand, for the third year in a row, to provide the entertainment for the celebration.