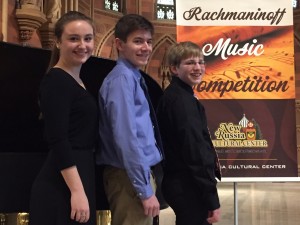 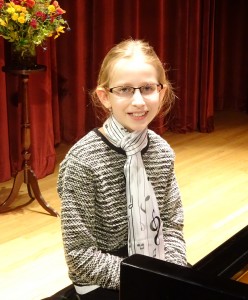 On Saturday, February 11, 2017, four private piano students from The Music Studio won prizes in the Rachmaninoff Competition sponsored by the New Russia Cultural Center. The competition was held at the Cathedral of the Immaculate Conception in Albany, New York. Any piece by a Russian composer was eligible for the competition. Lidia Krylova, a fifth-grader, won 3rd place at the Young Level with a Polka-Mazurka by Guriliev. Nicholas Watson, an eighth-grader, won 1st place at the Junior Level with Moment Musical, Op. 16, No. 4, by Rachmaninoff. Alexandra Malle Sipos, an 11th-grader, won 2nd place at the Senior Level with Sonatina (1959), by Khachaturian. And Jesse Cohen-Greenberg, a ninth-grader, won 1st place at the Senior Level with Sonata No. 3, Op. 28, by Prokofiev. Lidia is a student of Ms. Vepritskaya; Nicholas, Alexandra, and Jesse are all students of Mr. Fennimore. Congratulations to our students and their teachers!