“They really seem to understand.”

“The teachers at The Music Studio are so kind & patient. They really seem to understand what works for children at such a young age.”
- Dibian Pick, Parent

Facility and Resources
Our four instructional classrooms are large, bright, sound-proof, and acoustically lively. Each classroom has a grand piano and eight digital pianos--one for each student--as well as a trove of instruments we use in class, from xylophones to recorders to drums of every size. Our facility also includes rehearsal space, staff offices, and a small recital space for special performances.
Patricia KeyesTeacher 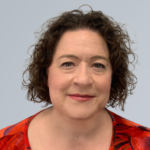 Patricia Keyes holds a bachelor’s degree in piano performance and music theory from Boston University, where she studied with Tong-il Han. She received a master’s degree in piano performance at Indiana University, Bloomington (studying with Michel Block) and a DMA in piano performance from Boston University (Maria Clodes-Jaguaribe). Her performing career includes a stint as a member of the CHISTI chamber players, and concerts in England, Italy, and the United States, where she still performs regularly as both a soloist and chamber musician. Dr. Keyes has been featured in live broadcasts on WAMC/NPR, performing the works of Beethoven and Dedrick.

Among her many academic appointments, Dr. Keyes has taught at the Luzerne Music Center, where she performed in chamber concerts with members of the Philadelphia Orchestra. She served as an opera coach at the Boston University Opera Institute, and there collaborated with such noteworthy artists as Phyllis Curtin, Richard Cassily, Phyllis Hoffman, Sharon Daniels, and William Graham. She has served as a member of the faculty at the University of Notre Dame, Skidmore College, The College of Saint Rose, and Union College, as well as an Artist in Residence at Middlebury College in Vermont. She currently teaches at the University at Albany.